bE a ReaSon fOr GuidAnce……

Chapter: The invitation of the Prophet saws to embrace Islam » 2942

Who brought the Clay from Earth to Allah for the Creation of Man???

Who brought the Clay from Earth to Allah for the Creation of Man???

Ibn Masud and other companions of the Prophet peace be upon him said that Allah the Almighty sent Gabriel onto the earth to get Him clay therefrom. The earth said: “I seek refuge in Allah from your decreasing my quantity or disfiguring me.” So Gabriel returned and did not take anything. He said: “My Lord, the land sought refuge in You and it granted.”

So Allah sent Michael for the same purpose, and the land sought refuge with Allah and it was granted. So he went back and said to Allah what Gabriel has said before him. Then Allah sent the Angel of Death, and the land sought refuge in Allah, the angel said: “I also seek refuge with Allah from returning without carrying out His command.” So he took clay from the face of the earth and mixed it. He did not take from one particular place, but rather he took white, red, and black clay from different places.

The Angel of Death ascended with it, Allah soaked the clay till it became sticky. Then Allah said to the angels: “Truly, I am going to create man from clay. So when I have fashioned him and breathed into him
(his) soul created by Me, then you fall down prostrate to him.”

So Allah shaped Adam into a human being, but he remained a figure of clay for forty years. The angels went past him. They were seized with fear by what they saw, and Iblis felt fear most. He used to pass by the figure of Adam, buffeting it, which would make a sound like pottery.

Allah told us: “He created man (Adam) from sounding clay like the clay of pottery.” (Chapter 55:Quran).

Did Allah ask for the Opinion of the Angels???

Did Allah ask for the Opinion of the Angels???

We imagine when Allah the Almighty decided to create Adam: He addressed His angels and told them to prostrate before him. He did not mean to ask their opinion or take their advice, for He is above that. Allah the Exalted told them that He was going to create a vicegerent on the earth who would have children and grandchildren who would corrupt the earth and shed each other’s blood.

That is why the angels said to Allah the Almighty: “Will You place therein those who will make mischief therein and shed blood!”

There are old traditions about the angels before the creation of Adam. According to Ibn Qatadah, it was said that the angels were informed about the creation of Adam and his progeny by the jinn who lived before Adam. Abdullah Ibn Umar said that the jinn had existed for about 2000 years before Adam and then shed blood. Therefore Allah sent on them an army of angels that drove them out to the depths of the seas.

Ibn Abi Hatim narrated from Ali jafar Al Baqer that the angels were informed that man would cause wickedness and shed blood on earth. It was also said that they knew that no one would be created on earth who would not be wicked and shed blood.

Whether or not these traditions are correct, the angels did understand that Allah would create a vicegerent on earth. Allah the Almighty announced that HE was going to create a human being out of clay, that HE would mold him and blow His spirit into him and then the angels should prostrate before him.

Abi Musa al Sha’arai narrated that the Prophet Muhammad (peace be upon him) said: “Allah created Adam from a handful of dust taken from different lands, so the children of Adam have been created according to the composition of the land. Therefore from mankind we have white, red, black and yellow ones; we have good and evil, ease and sorrow, and what comes in between them.” (Sahih al Bukhari).

Details of creation of Adam, Refusal of Iblees to Prostrate, Adam and Hawa sent down to Earth!!!

Details of creation of Adam, Refusal of Iblees to Prostrate, Adam and Hawa sent down to Earth!!!

“And surely, We created you (your father Adam) and then gave you shape (the noble shape of a human being), then We told the angels, “Prostrate to Adam”, and they prostrated, except Iblis, he refused to be those who prostrate.

Allah said: “What prevented you (O Iblis) that you did not prostrate when I commanded you?”

Iblis said: “I am better than him (Adam), You created me from fire and him You created from clay.”

Allah said: “O Iblis get down from this (Paradise), it is not for you to be arrogant here. Get out for you are of those humiliated and disgraced.”

Iblis said: “Allow me respite till the Day they are raised up (Day of Resurrection).”

Allah said: “You are of those allowed respite.”

Iblis said: “Because You have sent me astray, surely I will sit in wait against them (human beings) on Your Straight Path. Then I will come to them from before them and behind them, from their right and from their left and You will not find most of them as thankful ones (they will not be dutiful to You).”

Allah said: “Get out from Paradise, disgraced and expelled. Whoever of them (mankind) will follow you, then surely I will fill Hell with you all.” “And O Adam! Dwell you and your wife in Paradise, and eat thereof as you both wish, but approach not this tree otherwise you both will be of the Zalimeen (unjust and wrongdoers).”

“Then Satan whispered suggestions to them both in order to uncover that which was hidden from them of their private parts before, he said:” Your Lord did not forbid you this tree save you should become angels or become of the immortals.”

Satan swore by Allah to them both saying: “Verily I am one of the sincere well wishers for you both.”

So he misled them with deception. Then when they tasted of the tree, that which was hidden from them of their shame (private parts) became manifest to them and they began to stick together the leaves of Paradise over themselves (in order to cover their shame). Their Lord called out to them saying “Did I not forbid you that tree and tell you, Verily Satan is an open enemy unto you?”

They said: “Our Lord! We have wronged ourselves. If You forgive us not, and bestow not upon us Your Mercy, we shall certainly be of the losers.” Allah said: “Get down one of you an enemy to the other (i.e. Adam, Eve, and Satan etc). On earth will be a dwelling place for you and an enjoyment, for a time.” He said: “therein you shall live, and therein you shall die, and from it you shall be brought out (resurrected).”

Informing the Angels About Adam

Informing the Angels About Adam

“Remember when your Lord said to the angels: ‘Verily, I am going to place mankind generations after generations on earth.’ They said: ‘Will You place therein those who will make mischief therein and shed blood, while we glorify You with praises and thanks (exalted be You above all that they associate with
You as partners) and sanctify You.’ Allah said: ‘I know that which you do not know.'”

Allah taught Adam all the names of everything, then He showed them to the angels and said: “Tell Me the names of these if you are truthful.” They (angels) said: “Glory be to You, we have no knowledge except what You have taught us. Verily, it is You, the All-Knower, the All-Wise.”

Remember when We said to the angels: “Prostrate yourself before Adam” They prostrated except Iblis, he refused and was proud and was one of the disbelievers(disobedient to Allah).”

We said: “O Adam! Dwell you and your wife in the Paradise and both of you freely with pleasure and delight of things therein as wherever you will but come not near this tree or you both will be of the Zalimeen (wrongdoers).”

Then the Satan made them slip therefrom (the Paradise), and got them out from that in which they were. We said: “Get you down all with enmity between yourselves. On earth will be a dwelling place for you and an enjoyment for a time.”

Then Adam received from his Lord Words. His Lord pardoned him (accepted his repentance). Verily He is the One Who forgives (accepts repentance), the most Merciful.

We said: “Get down all of you from this place (the Paradise), then whenever there comes to you Guidance from Me, and whoever follows My Guidance there shall be no fear on them, nor shall they grieve. But those who disbelieve and belie Our Ayah (proofs, evidences, verses, lessons, and signs and revelations, etc) such are the dwellers of the Fire, they shall abide therein forever.”

when going to the masjid

Supplication when going to the masjid 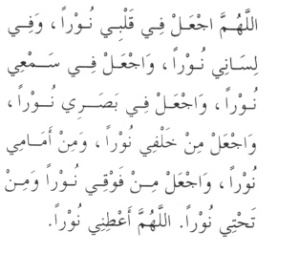 when leaving the home

When leaving the home

‘In the name of Allah, I place my trust in Allah, and there is no might nor power except with Allah.’

‘O Allah, I take refuge with You lest I should stray or be led astray, or slip or be tripped, or oppress or be oppressed, or behave foolishly or be treated foolishly.’

even if you falter… get “double the reward!!!”

Aa’isha (Radiallaho anha) narrates that Rasulullah Sallallahu `alaihi wasallam once said, “One who is well versed in the Qur’an will be in the company of those angels who are scribes, noble and righteous; and one who falters in reading the Qur’an, and has to exert hard for learning, gets double the reward.” (Muslim)